I will be in Nash-Vegas this weekend.

I will run a race through a zoo.

Through a zoo, a 5K. Jesus, please, let a lion, an angry Pizza Hut manager lion,  hunt me down, maul me, I pray (new PR!). I’m at the age where I admire, advise to, will urge (thought not yet will pay for) a mauling.

I’m old, out of shape. And I am training for Boston. This 5k is a yawner and a way for me to get outdoors. But I’ll run a little fast because of genetics. I don’t take races off, I’m too neurotic. I have fast running genes, but not sure why (I don’t actually know my biological father). I just know I often run faster than I should run.

Also in Nash-Vegas I will disc golf. Maybe pics, but often I forget to bring a camera.

(Bringing a camera when you have fun is a disease.) 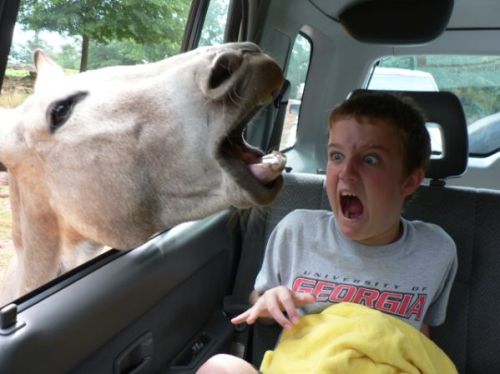 Been there (and why i don’t cheer for Georgia)

ME got some new groove at KORA.

It’s a lam-ish prose poem but I happy to see it pixel. I am happy to see the first issue because later the first issue will sell like a comic book first issue. Or whatever I am trying to say. Why won’t you dance? (Carver title–frack him.) Sometimes I think we all dance to a music we don’t understand, or maybe even hear that well, but yet we dance.

(I remember once this company tried to bulldoze the tiny woodlot behind my childhood home, to build more houses. So my neighbor, Walter, and I, in the wonderful fog of night and distracted parents, pulled up all of their survey stakes and spray-painted the Big-Machine tires (sorry, god) and even placed nickels in all the light sockets of their cheap-ass manager trailers (flip the light switch on–BAM! Fuses blow). Youngish kids were we, yes, but we HAD TO. Even then, the woodlot was sacred, an obvious moral vision, though we would never have said it that way. It was just where we built forts and trapped crawdads and discovered bee hives in hollow logs and waded through flowing streams. We had to pull stakes three times, surprising even then, as they (Destructors of Megaverse?)  had a tendency to replace survey sticks, bright pink flags in the breeze. But they went away, finally. Gave up, somehow, someway. The woodlot survived. A creek runs through now, as then. Maybe even tomorrow. Our veins and arteries are creeks (rivers flowing, both). 75% of the planet Earth, water. 75% of our human bodies, water. But I don’t want to get flaky, don’t feel the need. And I’m sure they quit trying to flatten the earth for whatever financial concern. It wasn’t two rangy kids. But listen now: that creek in Memphis is real,  so full of bluegill, bullfrogs, water turtles, oil filters, memories, bottled water bottles, condoms, a vibrant green mallard drake, a paddling drake, a quivering wake  in my synapses today. I said Today.)

ja “steven” Tyler is there in KORA.

Dude publishes the way I send rounds downrange, a-many. I have a new stock on my 10/22. What does that mean?

Why Molly would ever take the JA man on in a publishing contest is still a mystery today.

Dude is a locust, Molly. Scorched earth is his middle name. I toast (pun) him.

My fav in this issue was by Brandi Wells.

This: dream to eat

I have this recurring dream where I am teaching a kid to ride his bicycle and his legs get tangled in the bike chain and his foot gets cut off. When I wake up, I’m hungry.

“Television won’t be able to hold on to any market it captures after the first six months. People will soon get tired of staring at a plywood box every night.”
Darryl Zanuck, executive at 20th Century Fox, 1946
*

Ok, this reader (crazy-ass project/blog) submit pic of nachos raises the bar. Damnation! I will include the attached message. 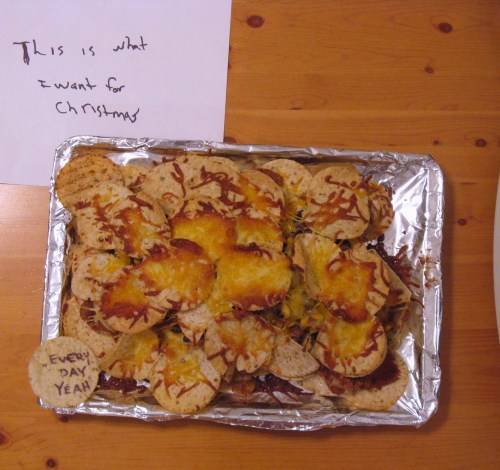 “These nachos were actually made and eaten and photographed with the intent of sending you the picture the day ryan call submitted the first nacho photo.  I believe the picture does not do these nachos justice.  They were three days in the making.  Monday we had turkey loaf.  Tuesday the turkey loaf became burrito mix.  Wednesday the burrito mix became the second and third layers of the nachos.  All you can see is the top layer (4th).  Bottom layer refried beans, etc…”
*
Damn!
*
Dam (holder back of great water, great pain, energy)
*
1.) How many layers are there? This is a very traditional Mexican style (though sans turkey), but with a strong Indian influence (long story–the layering, but India has surged in the modern nacho world) and I am glad to see nachorotics, nachosexuals, nachocans aware and utilizing the form. The layered nachos usually makes a cyclical statement, like short skirts, or cocaine (1920s big, 1940s pretty big, 1980s HUGE..we’re still awaiting the comeback in America–2010?).
*
2.) Turkey? A time honored philosophy of turkey is one word, the word we all know if ever fired from a job, or left by an Other, or not-picked in a game of bocce, or had a beautiful person at a grocery store look us not in the eye, but in a spot about 7 inches above eye contact–LEFTOVER. Now that’s a whale of a lot better than white bread sandwich with mustard (though those maybe are actually good–I remember, from years ago, when I ate turkey.) We can only hope crushed garlic and cumin were added to the beans. We can only hope. Hope.
*
There is type of thrush that migrates across N America, thousands of miles, and it stops once on the journey, pauses once to nap–for 9 seconds. Exactly that, 9 seconds. That is some kind of Blake Bulter crazy shit Ever insomnia nonsense.
*
But I like it. It gets shit done.
SO
*
S