The poet Mark Neely and I ran the Indy Mini-Marathon? Why?

1. Because Mark and I are writers and teachers of writing, and if we don’t do something physical when not doing something writing-related, we will lose our freaking skulls. Hemingway had fishing. Tennessee Williams had swimming. Edna St. Vincent Millay liked to dance on tables and the spleens of men. Etc.

You live in the brain long enough and you will die in the brain. Writers need to DO SOMETHING physical, I feel.

Many writers find cutting the yard as satisfactory. Not to mention shooting bows. Some writers throw things at walls, like ashtrays or hurtful words, or will marry and un-marry repeatedly. Years ago, I knew this one poet who was always purchasing alligators or egrets. Just purchasing them, you know, daily. So you see my point. 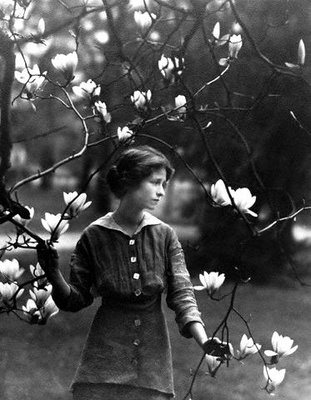 [A woman known for exercise]

2. Because we get to run around the actual Indy 500 speedway! Glow.

3. Because the name of the race is stupid. Running 13.1 miles is not a “mini-marathon.”

4. Because it is Mark’s inaugural half-marathon, and he’s not playing around. The man picks the real thing, a BIG one. How big?

5. Because this race is the largest half marathon in these United States.

35,000 runners! (Another 5,000 ran the 5K, but who would want to run the 5K at an event like this? I always feel low running the 1/2 at actual marathons, but running the 5K at such an extravaganza? OK, OK, I know I should be happy anyone is running anything, and usually I am. But here? I’m sorry, I’d be slinking.)

4,000 volunteers! (Thank you vastly, volunteers! This was easily one of the most organized races I have ever run. Very impressive, and the volunteers were a big part. Kind, timely, encouraging, professional.)

Wait, wait, back up. Before you go to the race, you must clutch and keep the EXPO. You get your race number, pick up some swag, go naked or costumed, maybe see a few pro runners. And who do we meet at the expo? A true legend. The last U.S. man to win gold in the Olympics. The man who is generally known to have started the running boom in this country.

Yep, that’s me with Frank Shorter. Pretty much my race couldn’t get any better now. Mr. Shorter was gracious and kind and cool. I mean the guy had class. He’s standing there talking to an idiot (me) about MY race, engaging me in conversation, when really shouldn’t we be focusing on him? Very impressive person. Exponential glow.

Mark and I both had Mr. Shorter sign our race bibs. Then I headed home for a pre-race meal: Couple beers and a fat plate of nachos.

Try to sleep. Can’t sleep too well. Cat keeps pacing around the house mewing after another cat that died recently, so it’s like we have ghost-cats in the house or some shit. Mew. Meeeewwwwwwwww. Creepy. Oh well. I have a dream I am a music box strapped atop a race car that is leaping over a river of gleaming pink taffy. Is this a sign?

Get up early. Wrestle a banana. Drink some Powerade Zero. Wait for Mark to arrive at house. Mark is here! We are ready to run!

Parking is organized. Gear-check is organized. Starting line is organized (catching a theme here?). I mean this is 40,000 runners! This race could teach other races a thing or two about logistics. Perfect day. In the 50s. I pack my fancy new iPhone holder with iPhone, car key. I bought this at the EXPO and it’s the best I’ve seen, also waterproof: 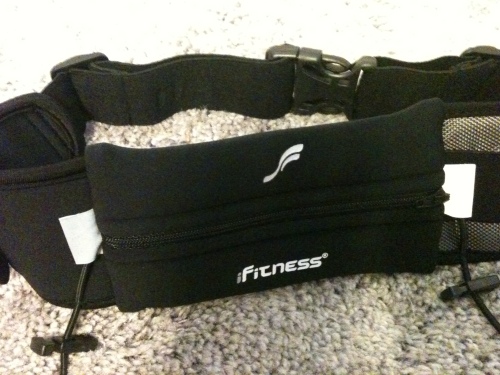 Important question: Sports Beans or gels?I don’t have a huge opinion. Both will do the job, and warning: both can upset your stomach. But you are going to train with a product before you actually race with it, right? Right. Don’t be an amateur. So, my preference: gels. Why? Sports Beans are too damn chewy! I’m trying to run a damn race here, not gnash my way through leather goods. Gels go down smoother. Both will need water. So there. Pop a gel, I say. Pop a gel, about mile 9.

(I did go Sports Beans at the St Louis Marathon a few weeks ago, so this might have turned me against. The St Louis marathon was 86 degrees, full sunlight, Sirocco winds, hilly–absolute hell. The conditions were so bad they had to STOP THE RACE. They couldn’t catch me, though. I did finish, but barely [3:23]. I was then violently ill for hours. Violently ill. I do not want to revisit in any way the St. Louis fiasco.)

Despite an early start for the race, runners began to collapse in the heat. 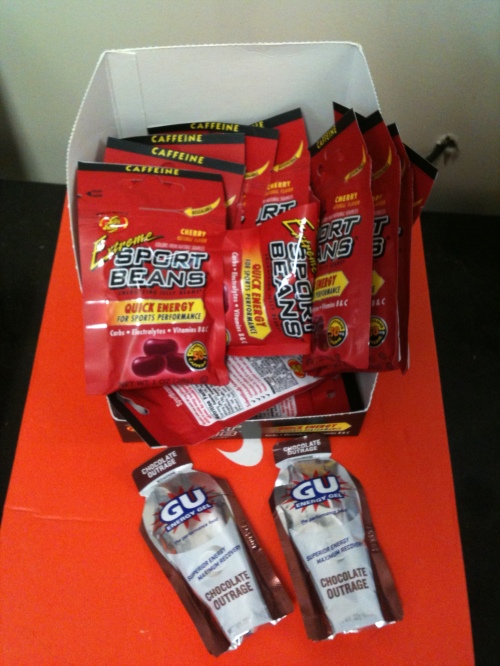 So I load a few gels, Mark goes with beans, and we walk towards the START. Beautiful runners everywhere. Runners stretching, runners warming up. I think runners, especially in running gear, are generally attractive. Then again I am biased. Smell of sweat and nerves. Time for us to load into our STARTING CORRALS; they have them alphabetically A-Z.

I am in corral A because I can run fast once in a while.

Mark is in E, very respectable starting position for a first time half-marathon. I know Mark must feel nervous now, but I am not. He did his training, so I know he’ll be fine. He will find out there are advantages and disadvantages to a corral system. For me, it’s fine. I mean I am actually at the START line, so no problems with crowds or flow or whatnot. For him, it could get congested.

Helicopters humming. Loud music.A man over the speaker says DO NOT OPEN GELS ON THE INDY TRACK.

Um, OK. They don’t want any gel packaging in the Indy 500 track. Maybe a race car would slip in the slimy? Odd.

More nerves, adrenaline fumes odor, runners hopping, flexing around–this tension I love. We are all about to DO SOMETHING, apart yes, but together. I look around at all these strangers, but I know them. We share a vocabulary–fartlek, VO2, Frank Shorter–and we know the secret burn and sweetness of pain. We know to be more careful on the downhills than the uphills. We know how to loosen the jaw, how to hold an egg in our curled fingers. We know that homework must be done, and if it isn’t done, the truth will out today; and if it is done, the truth will out today, and either way, we are about to finally, finally be involved in a human system, where for good or bad or ugly, we are going to get what we DESERVE.

The START, excellent. Since the Bin Laden killing, I was afraid they might go over the top with the patriotic thing, but it was fine: quick national anthem, a few soldiers singing, crank up some dance music, some lady says, “Runners, start your engines” and then the spectators all counted down from 10, 9, 8, 7…3, 2, 1. And we were off!

Mile 1: OK. Get into pace. Adrenaline. Christians on speakers trying to tell us something. Cheering, yelling. Some sort of anti-slavery people marching in a line? Like a small little protest. Some dude in his underwear. OK. Lots of people waving and shouting; they line the street. Lots of signs:

THE PAIN YOU FEEL IS WEAKNESS LEAVING THE BODY. 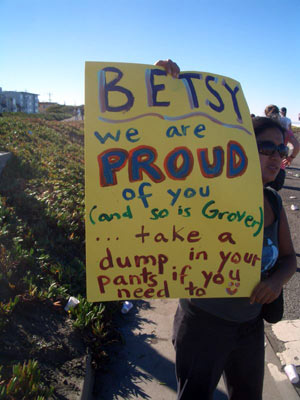 I hope I am miles away from Betsy when she takes that dump in her pants. Head-wind. Bridges. I generally like bridges. Flooded White river. I hope Memphis is OK. I like Memphis. Mind sort of wandering, pleasurably soaking in the event.

Mile 2: Just cruising now. Just all groove.  A lot of the guy runners are taking off their shirts and gloves and hats and throwing them into the air. Guys always do this at long races. They wear too many layers and then, as they warm up, they toss away their clothing. You can see their joy–to just throw perfectly good clothing aside, like to say, I’m running here, I’m an animal, fuck that clothing. I rarely see women do this. They plan better, somehow. They wear the correct amount of clothing and so don’t need this odd display of clothing-toss. I think.

At this point, Mark is learning the downside of the Corral system. He’s trapped in a MASS of humanity and is having trouble running his own race, his own pace. He can’t get past thousands of runners. As a result, his first two miles will be slower than he wants, and he’ll have to compensate by running fast once the course opens up and the runners fan out…Not the optimum way to pace a race. 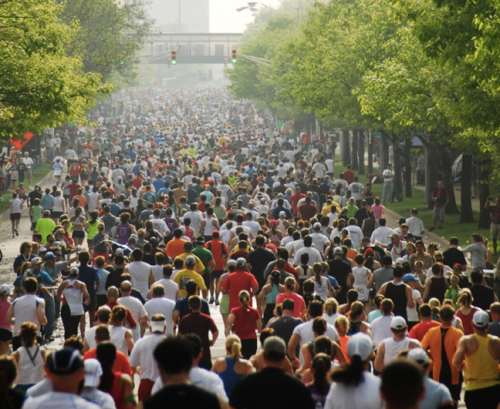 Miles 3-5: Oh no, dead legs, the St Louis hangover. I expected it–the marathon wasn’t that long ago, but still. I don’t want to have flip-flop legs this early. Oh well, fuck it. Shake out my arms, relax. I just focus on my pace (running about 6:20 miles) and enjoy the run. Look at all the bands! Rock bands and ska bands and folk bands and Christian bands and heavy metal teenagers bands. Thank you, musicians! It does help us runners. And also some of you look funny. That makes me happy to see you looking so funny.

Mile 6: Catching a little second wind here. That happens, thankfully. It’s ups and down, these longer races. My legs are getting their spring back. Feeling all Eugene, all jars of boingy. There is butterfly in my shin. Break my name, break my name. Not sure what that means. Mind wandering again…What is that gigantic concrete oval?? Yes, yes, it is the INDY 500 track! I’m not a car racing fan, but I recognize the historic. In a word, to run a lap here is cool.

I must be inspired. I get into a groove on the track. I’m floating a bit. Could be the location. Could be the hundreds of cheerleaders, some in bikinis. Could be all the race cars parked on the oval. Could be Frank Shorter who is here at the track, working the race for television. Could be I’m just fit right now and running in a nice flow.

Mile 10-11: Grinding a bit. A living room coach on my forehead. The elation I felt at the track now wearing away…legs feeling a bit dead again. Grinding, but that’s OK. That’s what I’m here for, to feel pain, and to know that pain IS NOT suffering. You can take pain and ride it, take pain and gather it into a force, to push you along. I’ve done it many times. And here I do it again…

Mile 12: The race is psychological now. You got this, is what I’m saying to myself. Grind, grind…You got this.

They are playing INDY 500 tape loops of close finishes over a giant loudspeaker. Excited announcers and engines roaring. The streets are lined with cheering fans! Checkered flags are waving. Grind, grind, bring it home!

I’ll take it. And why am I being given two medals? That has never happened. You get one medal per race. Why? Because I am now a proud member of the 500 club. The first 500 finishers get a special medal and inducted into the club. OK. OK, I didn’t know that. SWEET. I feel like a gazelle made of Velveeta now. I’m smiling. 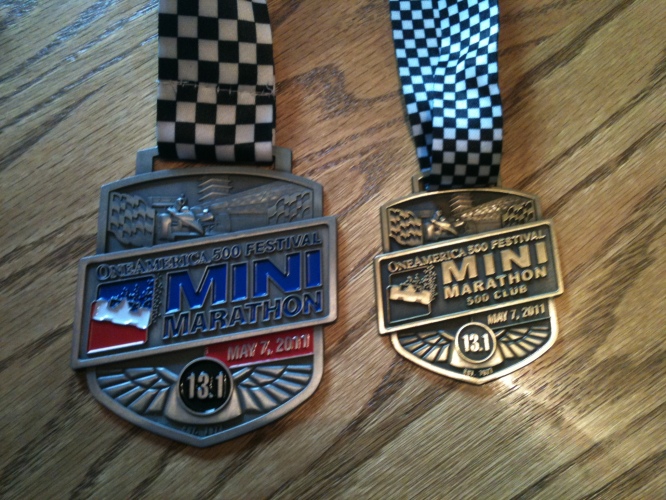 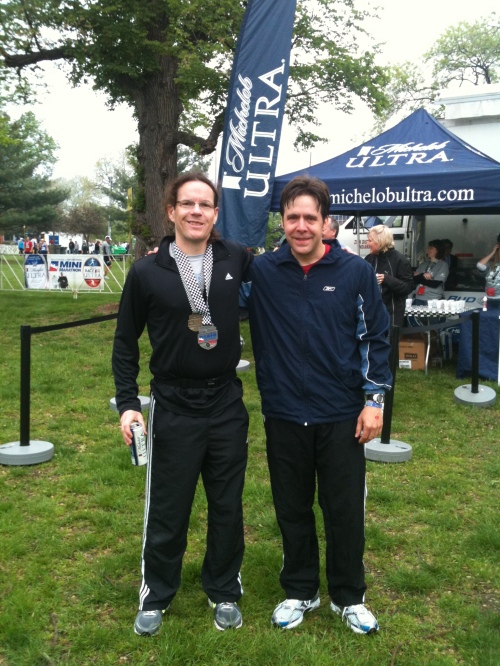 Since being in Indiana, I’ve heard a lot of hype about this race. It’s all true. Amazing, well-done, professional. A great race. End of story.