The Captain by Ron Currie Jr. is an odd one, both large and small, compressed and expanding, as is the way with some flash.

The Captain, dressed in starched khaki shirt and pants, descends the stairs for his breakfast at 7:31 AM.

…it begins, and, for me, this set a light tone. I thought the text was going for farcical, almost Captain as Quixotic…I had this ridiculous vision of a man dressing up specifically for this ritual of breakfast.

(not so unlike some writers who work from home, yet still don a suit in the morning before sitting at their desks)

But then the tone shifts.

And the idea of ritual takes on a new meaning.

Maria, his housekeeper, sets a plate of scrambled eggs and extra-crispy bacon at the head of the table. She pours his coffee. She says, Good morning, Captain. He nods, wishes her good morning. She wants to call him Admiral—that was, after all, the rank he was given upon his retirement—but she knows this would anger him. The Captain considers himself a Captain still.

The Captain is, as he sits eating his eggs, the only man in the United States Navy to ever have been court-martialed for losing his ship during wartime. His back is straight, shoulders squared. He is seventy years old.

First, this isn’t a farce, unless we’re going assume cruelty by author, and we are not.  (To quote Currie Jr: “With ‘The Captain’ I was aware, too, that I was dealing with real people, and I think that made me approach the thing more carefully.”) This is clearly based on an actual person now, Rear Admiral Charles Butler McVay III, the only commanding officer of a warship in the history of the U.S. Navy given a court-martial for negligence during wartime. Captain McVay–for those who care, and really you should care if you care about literature, or life–was, in my opinion (and many others), wrongly blamed after the sinking of his ship, the USS Indianapolis CA-35 (of the crew of 1,196 men, 879 men died–the worst disaster at sea during the entire war for the US Navy). But the ship was on a secret mission, so no rescue came until too late, no destroyers escorted it, McVay wasn’t given critical information, etc., etc and so on.

I could go on, but let’s make one thing clear: as a persona to base a flash on, this one has power and potential. Captain McVay is a cursed, almost mythological character.

I myself write a lot of Persona flash. It’s important who you pick–not every persona brings weight. This one does. Some writers sabotage their own persona flash immediately when they choose the historical figure (though I’d also argue ANY persona COULD be effective, with right technique).

Other writers never take the persona seriously. Currie does. He knows he’s dealing with something larger here, as in history. Even better, it’s a complicated and controversial history.

I guess I’m saying I read a great deal of persona poetry and flash. I think it definitely works best when the persona is conflicted. Really, a persona is not about the exterior events of whomever; it is about the internal reaction to the events. That’s really what is interesting, again, the literary aspects.

Second, in the excerpt above, the techniques that will drive the flash are established. A distant, yet informative narrator, who gets in/gets out with information and then allows the flash to unspool.

Maria and The Captain drive the structure of the flash and contain it. They are two satellites that spin about each other, in orbit and in their rotations, energy pushing off one another. They are in a dance (I’ll mix metaphors if I like; it’s my blog), yet it’s a trance-like dance, again, a routine, but each person is a step away from breaking the practiced steps, you can feel it, with Maria’s constant tension, The Captain’s daily awareness of his burden. Both characters busy themselves–Maria scrubbing pots, the Captain planting shrubs–while their interiors roil. They make small, ordinary movements, and then the narrator gooses the accelerator by dropping in brief, precise exposition:

The Captain’s home is two hundred miles from the nearest ocean.

Years ago, before it was sunk, the Captain’s ship delivered the bomb that destroyed the city of Hiroshima.

(Now you know why the mission was secret.)

It builds. It weaves–Maria, Captain, narrator–and builds. Rising action. This weaving is done well by the author, a light touch, no info-dump or front-loading or characters over-talking or any other clumsy technique. Here, it’s quick and effective. Unobtrusive.

I can’t tell you how many writers struggle with weaving in information into flash. It’s one glaring fail I see repeatedly in the genre. So I commend this author for showing how it’s done.

And the narrator stays out of the way. It provides what you need, but little more, no indulgence, no tricks (as Carver might put it). We are given the objectivity to watch it all unfold, and also this removed tone heightens tension. Counter-intuitively, in fiction a removal of narrator often works best with the most dramatic material (see Hemingway’s early war writings, etc.) 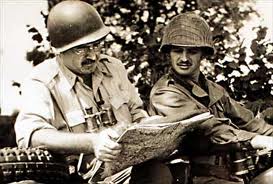 And then the ending turns, as we conclude on the man who sank the Captain’s ship, a food scene to structurally circle the opening, but then sleep not pacing, his doppelganger yet antithesis, tranquility to his anxiety, two men the same and very clearly a world apart…

It’s a technically compact flash and it carries theme. It’s not clinical in its tight form–it is actually human, and what appeared as farce turned on us, and becomes something more.

The final technique I’d like to note is ambiguity. Near the ending, the narrative eye finds The Captain upstairs in his room with his service revolver. Downstairs, Maria cuts her self with a paring knife and screams!

Why did she scream?

So, we are downstairs with Maria when it happens. We are not even present in the scene. It’s pretty brilliant that way. We are over here, while the crux of everything is over there. We don’t even get the sound of the act–we get the scream…

Yet we know exactly